The Standards for Educational and Psychological Testing states that there are five resources for evidence of validity which need to be examined in the evaluation of a measurement implement. The aim of this study is to evaluate the validity of the Academic Motivation Scale (AMS) - Short Indonesian Language Version. The three stages of this study were conducted over differing time periods, as well as differing resources of evidence of validity. In the first stage, the only resource of evidence of validity used was in the form of testing for reliability and correlation between the items, which aimed at determining just which items would be utilized in the short version. Meanwhile, with the second and third stages, after the items had been reduced, evaluation was conducted based on two resources of evidence of validity, the internal structure, covering reliability testing and analysis of confirmatory factors, and resources of evidence of connections to other variables. Results of the reliability testing showed an alpha Cronbach value of more than 0.7, with corrected item total correlation of all items above 0.3 Results of factor analysis also indicated that all items grouped within its dimension, as well as the results of correlation analysis also indicating results in accord with earlier pieces of research. It may be concluded that the Academic Motivation Scale-Short Indonesian Version may be considered to be a reliable measurement instrument to measure academic motivation.

This work is licensed under a Creative Commons Attribution-NonCommercial-ShareAlike 4.0 International License.

Articles published in ANIMA are licensed under a Creative Commons Attribution-NonCommercial-ShareAlike 4.0 International license. You are free to copy, transform, or redistribute articles for any lawful, non-commercial purpose in any medium, provided you give appropriate credit to ANIMA and the original Author(s), link to the license, indicate if changes were made, and redistribute any derivative work under the same license.

Copyright on articles is retained by ANIMA and the respective Author(s), without restrictions. A non-exclusive license is granted to ANIMA to publish the article and identify itself as its original publisher, along with the commercial right to include the article in a hardcopy issue for sale to libraries and individuals.

By publishing in ANIMA, Author(s) grant any third party the right to use their article to the extent provided by the Creative Commons Attribution-NonCommercial-ShareAlike 4.0 International license. 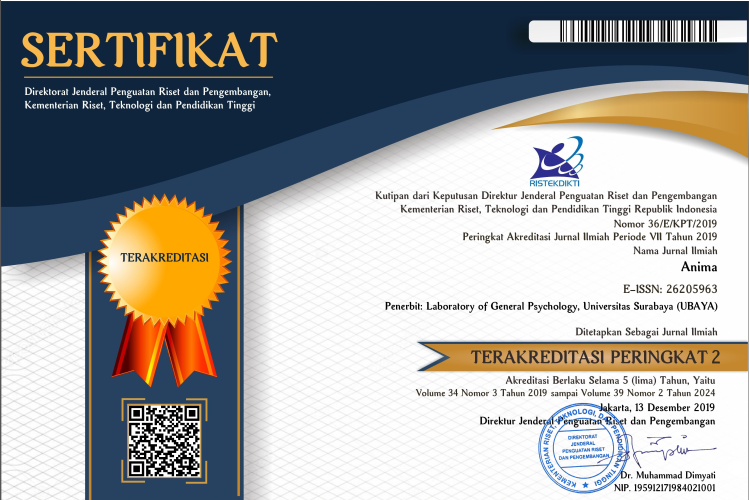 Information :
For Readers
For Authors
For Librarians